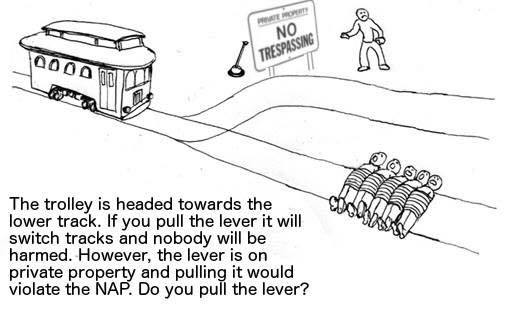 ‘pulling the lever would violate the NAP’

It’s been a while since I took the NAP seriously, but, no it wouldn’t?

Like, whoever put those people on the tracks violated the NAP, switching is obvious.

To make things hella topical:  If you are being sniped in a parking, do you not take cover behind a car, even if it isn’t yours? /not a completely applicable example, but the point remains.  Just because the sphere of private property should be expanded doesn’t mean that the commons aren’t real.

If the car is on somebody else’s property, yes, taking cover behind the car violates the NAP.

Preventing other people from using your property without your permission (AKA: Taxes) is the entire point of the NAP – first, get people to agree with the eminently reasonable sounding NAP, then pivot and explain that then they agree with [Insert Anarchist/Libertarian policy here].

David Friedman has a talk online with more examples of how the basic principles of Libertarianism are not automatically going to lead to a better more just society.