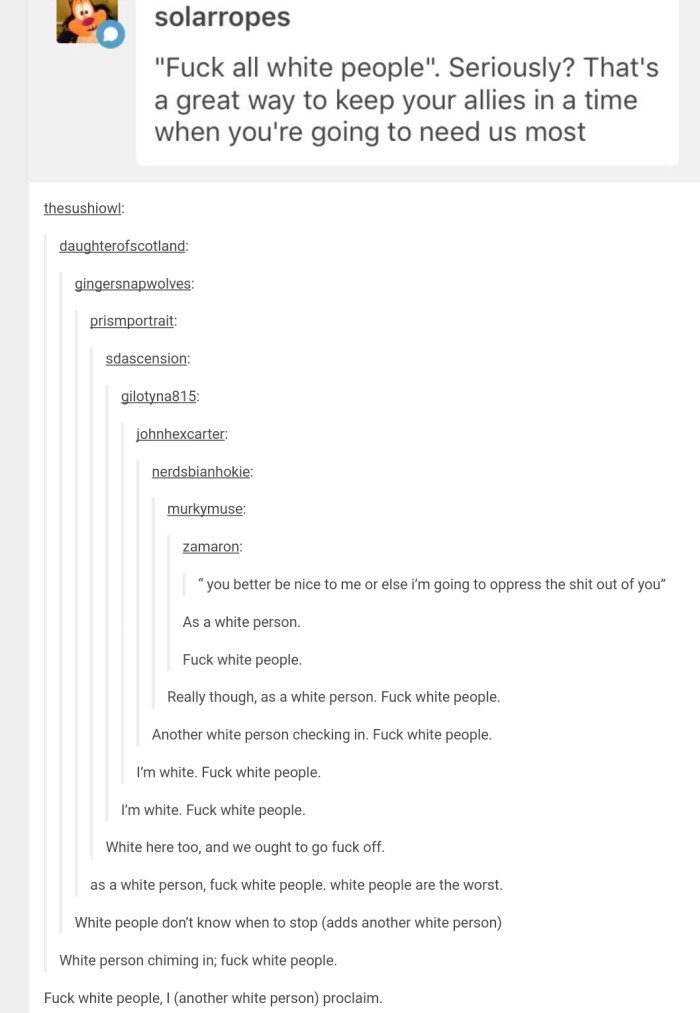 Imagine hating yourself this much

I don’t really see the two as comparable. Feminism is a political ideology that people belong to by choice, not a trivial factor people are born with. Furthermore, it’s a political ideology that has been taken over by a radical element and has evolved from a movement supporting equality to a movement supporting female supremacy. The woman saying they are against feminism are disagreeing with the female supremacy narrative. They aren’t out there saying “As a woman, I’m here to tell you women suck! Fuck all women!”

The equivalent for white people would be to say “The KKK sucks. Fuck the KKK!”, but the vast majority of white people do feel that way.

So, wtf is going on with those White people? Is it that they adhere to the ideology that says White people are morally inferior, like self-hating feminist men (“as a man, let me tell you that men are scum” is a thing I’ve seen a fair number of times)? Are they trying to curry favor from other people? “Woke” Whites or Black people? Is this an academic class thing? A general purpose self-hatred?

It’s not self-hatred at all. It’s popularity. These “woke” white men who can’t shut up about how evil white people are tend to be attractive, well-off, upper-middle-class, and most important of all, popular. Inherently popular. Other people instinctively align themselves with their goals and desires, because they are popular. Because they are popular, their goals and desires are “Punish unpopular people”.

For this kind of phenomenon, where members of a particular group – whites in this case – make such a big deal of proudly proclaiming the horribleness of their own group, the usual go-to article for explaining it is probably SSC’s “I Can Tolerate Anything Except The Outgroup”; Freddie deBoer’s “it eats everything” also seems very relevant, e.g.

Second, when the linguistic becomes the only means through which to
understand the world, the linguistic rejection of privilege becomes an
arbiter of who gets sorted into which camp. Curiously, the most
effective way to undermine one’s place of privilege is to announce it;
“I know I am privileged” becomes a tool with which to force others to
see you as something else.

“Talking
about “whiteness,” administrators say, gives white students a way into
conversations about equity and prejudice that previous diversity efforts
at their schools may have excluded them from.”

Thus
the white person who rails the loudest about white privilege feels
themselves to be least vulnerable to the accusation of being so.

And yeah, it very much is a popularity/status move, where these people, by painting their own group as horrible, are effectively trying to display themselves as in some sense more morally aware – “woke” – than their group in general, and thereby display themselves as morally superior, worthy of a position of moral authority over the hoi polloi. And yeah, it’s a marker of social status and … unchecked privilege, I think, since the people proclaiming the horribleness of their own group like that are invariably the ones that are least likely to actually *lose* anything from having their group recognized as horrible and the most to gain from labelling other, lower-status, members of their group as horrible.

It’s pretty similar to the role “humility” tends to take in religious contexts, where people proclaim their inherently sinful nature – “original sin” – and make a big deal of flaunting how humble they are before God or whatever – which very often becomes a way to prove/demonstrate their moral authority. Overuse of this kind of social tactic is, as it looks to me, a major part of why there exists a stereotype of religious leaders as deeply sanctimonious.

The sad irony too is that Zamaron (and no doubt the others) misunderstood solarropes’ reply to begin with.

Because SJWs kind of have a hard time understanding that “hurting” and “not actively helping” are two very different things.

All that not being a bigot truly obligates me to is living my life in a way that doesn’t deliberately hurt you. And that’s it. That’s the entirely of my actual obligation.

Meanwhile, if you want my help, if you want me to put my blood and sweat and tears into actively putting in an effort doing things for you versus just worrying about my own life, then you need to at minimum not be an asshole to me. You need to instead at minimum show me some basic decency.

I mean, cause, sure, I’ll be happy to fuck off if you want. But that means fucking off with my help too, not just with my “oppression” of you.