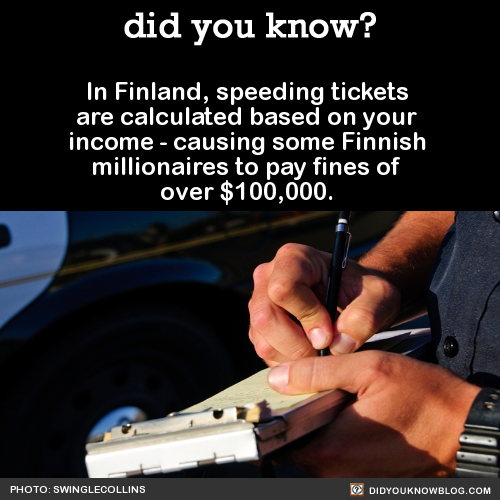 In Finland, speeding tickets are calculated based on your income – causing some Finnish millionaires to pay fines of over $100,000. Source

This is what “equality” looks like in that liberal fairy tale land of Finland.  They punish you proportionately to how successful you are.  Sounds really “fair.”

Except… it is fair? Because it’s proportionate. I don’t get what’s difficult about that. An impoverished person paying $400 dollar fine isn’t the same as a millionaire paying the same amount. For the poor person, $400 dollars could mean starving. Would you really claim it would have the same consequence for a rich man? Would it even be noticeable to him, while the absence of food in their stomach would be glaring to a poorer man? Would it be fair for a man to starve for the same crime as a man that would be having a three course meal?

By taking income into account, it allows the impoverished able to still survive while paying any fines they may incur. And, ultimately, while $100,000 dollars would be noticeable to a millionaire, they would still get by. And, assuming the law is properly implemented, they would be paying the same equivalent of their yearly income that a poorer person would. That’s what makes it fair. They would be impacted the same way – but you are looking at the amount rather than the equation.

Also, it’s important to make sure that even the rich would pause at the cost of a fine. They need to fear the law just as a poor man does.

Finnish person here. Our speeding ticket system owns and only people who bitch about them are people who wanna break the laws – the loudest whiners are the rich people who think they can just pay their way out of trouble and that’s why we have laws like that.

Person making 10 dollars an hour: “Fuck, I better slow down”

Compared to a proportional ticket.

Person making 10 dollars an hour and must pay 400 dollar ticket: “Fuck, I better slow down.”

Like wtf. Some people have been so brainwashed by capitalism and worship of the rich that they literally can’t tell the difference between fairness and unfairness anymore.

It IS fair. The fact that it flies in the status quo so much should make you think about that status quo.

Hotter take: David Friedman disagrees with you and has a whole book about it, check mate anarchist.